June 26
Find best flights
Only 1 child aged 0-2 per adult is allowed!
Share this

Learn more about flights to Madrid.
Crazy Llama will help you quickly and easily choose and buy tickets to Madrid.​ 🛫

It is also the busiest airport in Spain by total passengers.
The airport, which was named after former president Adolfo Suárez, has four terminals, which handle local and international destinations. Transit from the airport into the city is by either metro, train, taxi, bus or car hire.

The best time to explore the city
from March to May in spring, or September to November in autumn.
Prices
Hotels from $16.67
Temperature
Madrid is coldest in January at average temperatures of 6°C and hottest in July when average temperatures hit 25°C. The most daily sunshine is in August at 11 hours.
Precipitation
Madrid has very little rainfall. The month with the most rainfall is April with an average of 50mm of rain.
The weather

The best time to visit Madrid is when the weather is at its best from March to May in spring, or
September to November in Autumn. 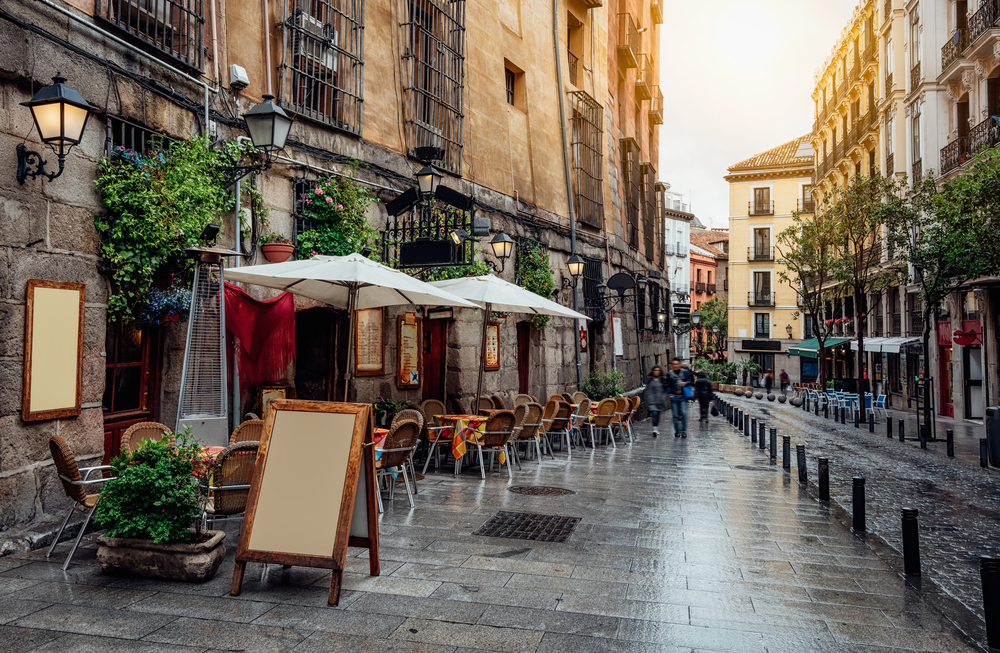 Home to the Spanish Government and Royal family, Madrid is the capital of Spain as well as its economic and industrial centre.

This metropolitan city is the largest in Spain with well over 3 million residents. Located in the centre of the country and the Iberian Peninsula, Madrid is surrounded by beautiful natural parks and mountains. As a hub for different parts of the country, it connects major cities by road, air and train. 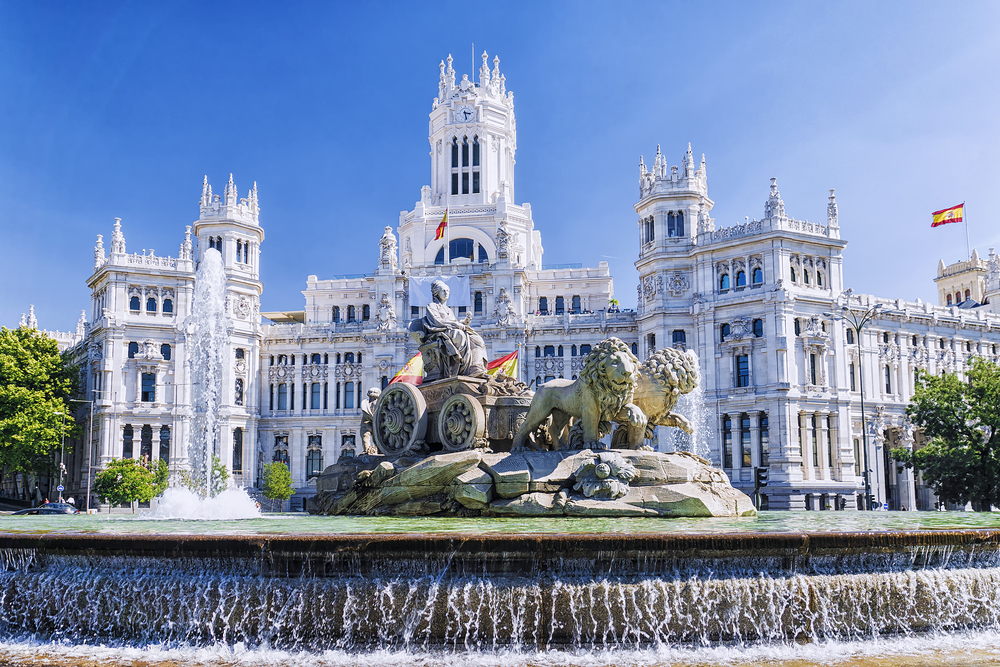 Things to do in Madrid

A city that offers a lot in culture and amusement, Madrid provides a variety of activities from sports, to art and a very interesting nightlife. The city has a number of large amusement parks, one of which is the Warner Bros park, which attracts visitors from all around. There are also great monuments and statuettes, which can be found at locations such as the Plaza Mayor, the museums Del Prado, the royal palace and many more.

Madrid also offers winter sports, a mere hour away from the city. And the food, whether on the street or formal dining, is as delicious as Spanish delicacy is renown for. 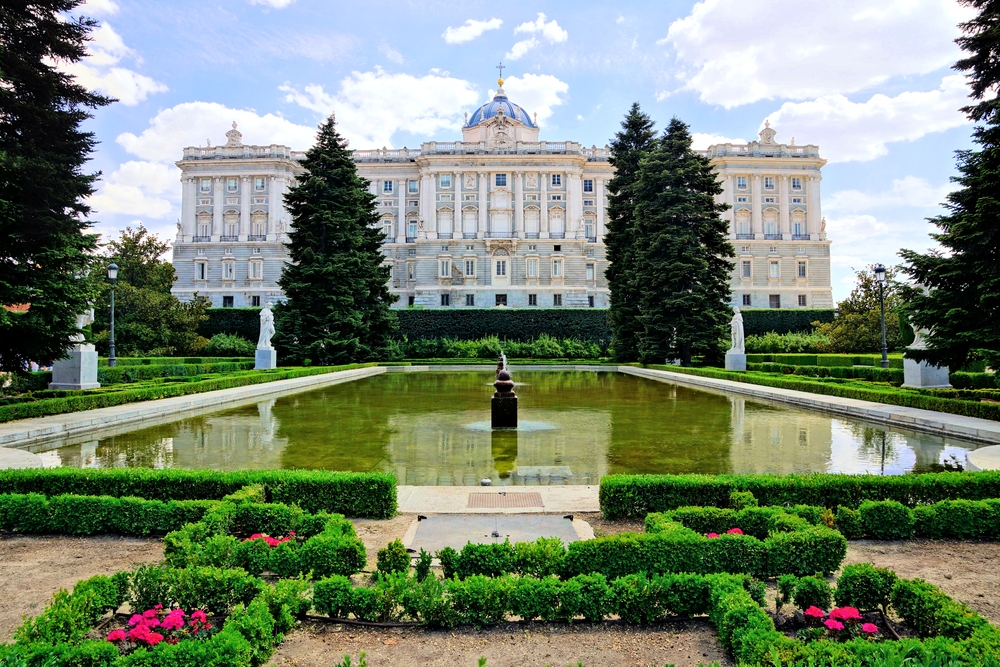 View of the Royal Palace of Madrid through the gardens, Spain

The largest palace in western Europe, the Royal Palace was built for King Philip V in the mid 1700s. Constructed with a mix of neoclassical and baroque styles, it was erected on the site of the Moorish Alcázar fortress after it burned down in 1734.

Within the fabulous palace, guests can find t among many treasures, the Royal Armoury which includes weapons owned by Charles V from the 16 th Century, as well as the only string quartet of Stradivarius instruments to be found in the world. 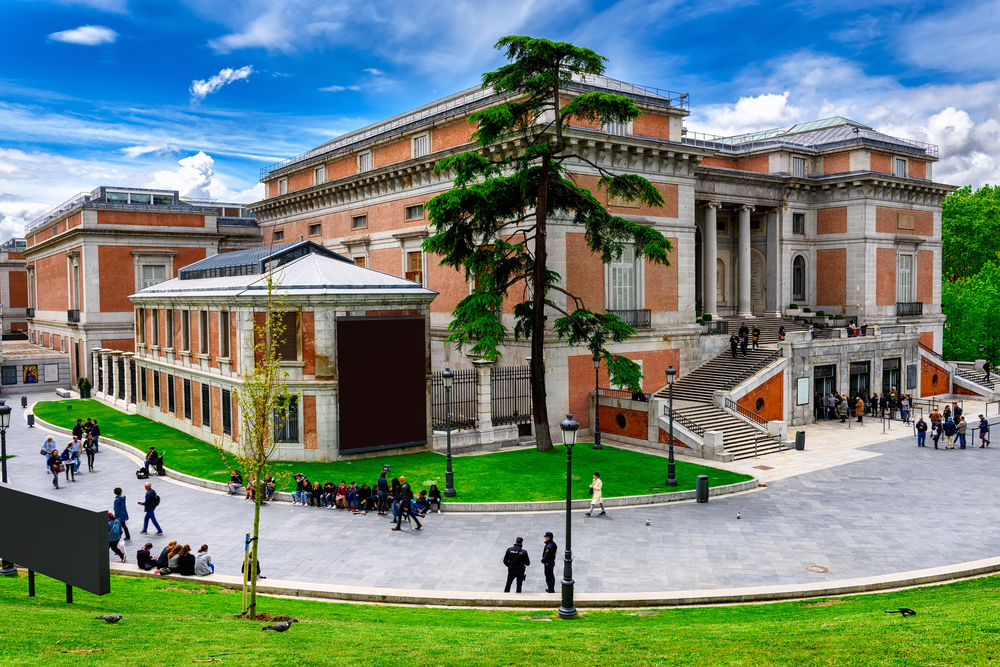 One of the most popular art museums in the world, the Prado is a must visit when in Madrid. With huge collections of art by the baroque and renaissance masters, any art lover would be enamoured by this museum.

Some of the most captivating works are Caravaggio’s David with Head of Goliath and Bosch’s Garden of Earthly Delights. José de Goya has 14 Black Paintings hanging at this museum, and is the artist with the most works represented here. 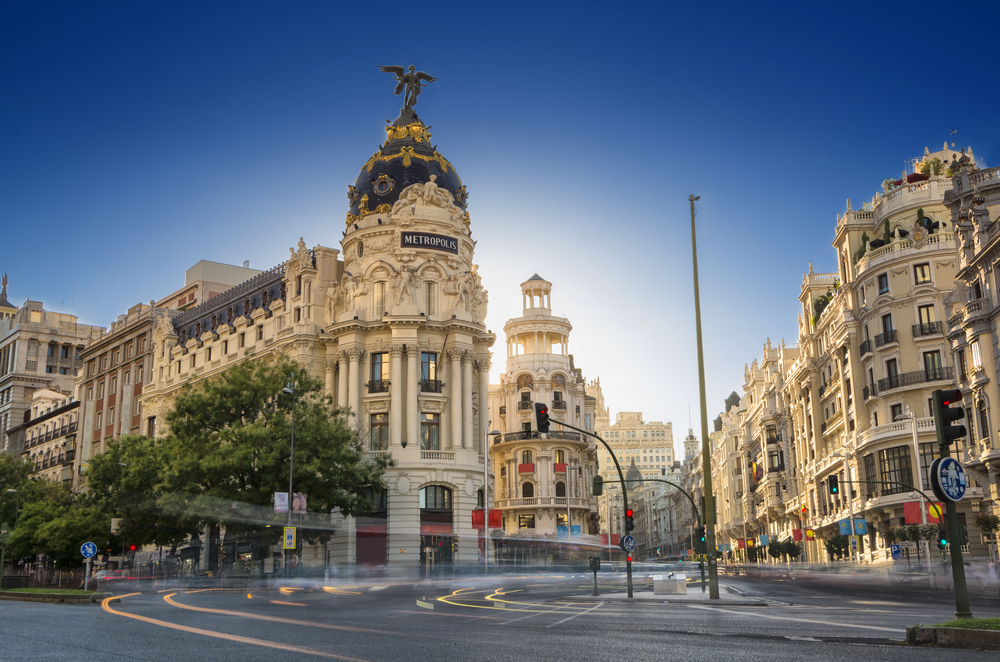 Madrid’s shopping and entertainment centre, the Gran Vía, is a great place to begin a walking tour of the city and also a lovely way to discover Madrid. Gran Vía is a very vibrant location, filled with malls, luxury boutiques and high end stores.

It is often alive from sunrise until sunset and couples
especially love to visit its cinemas, musicals and nightclubs. 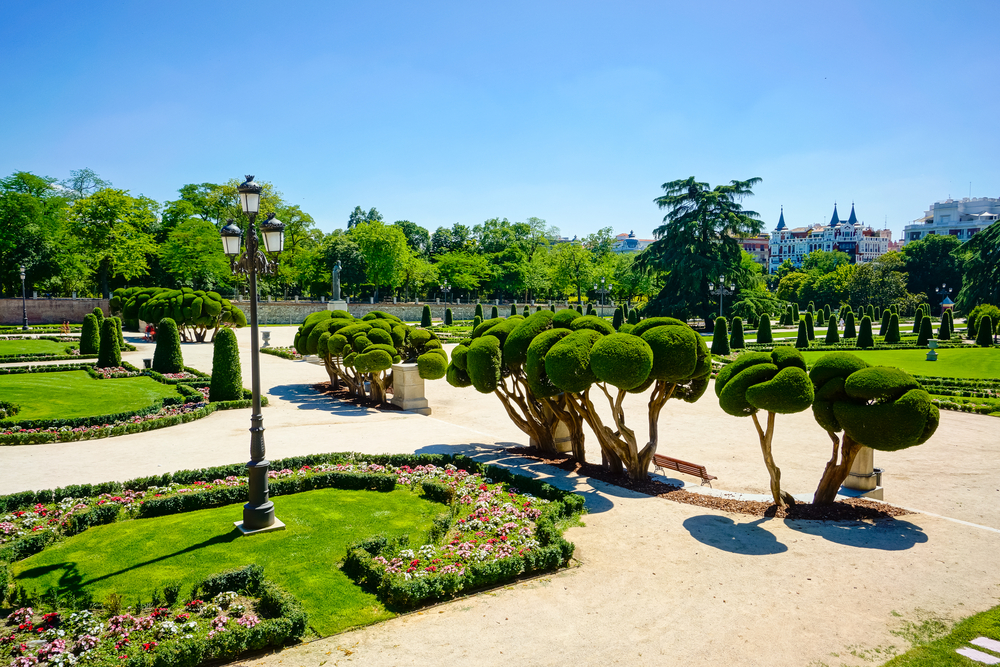 Just nearby the Prado can be found this lush park filled with elegant gardens. Also known as El Retiro Park, it used to be a royal property until it was opened to the public at the end of the 19th century.

A lovely place to spend the day, kids can enjoy a picnic or paddle on the Grand Pond, which is right next to the Alfonso XII monument. A Montezuma Cypress, the oldest tree in the city, can also be found near here. It was planted in 1633 and is protected by iron fencing.

Food is a very important part of life in Madrid, and brings Madrileños together in long lunches and dinners filled with good food, wine, and conversation. Some of the foods you can expect when visiting the city include, Cocido, a thick, homemade stew consisting of meats and vegetables, check peas, chorizo, lard and morcilla. Cocido is mostly eaten in
the winter.

Another delicious dish is patatas bravas, which is simply fired potatoes covered in bravas sauce. A snack, which can be had for breakfast, is the chocolate con churros which can be found at many street stands and cafes. It is usually served with steamy, delicious hot chocolate. 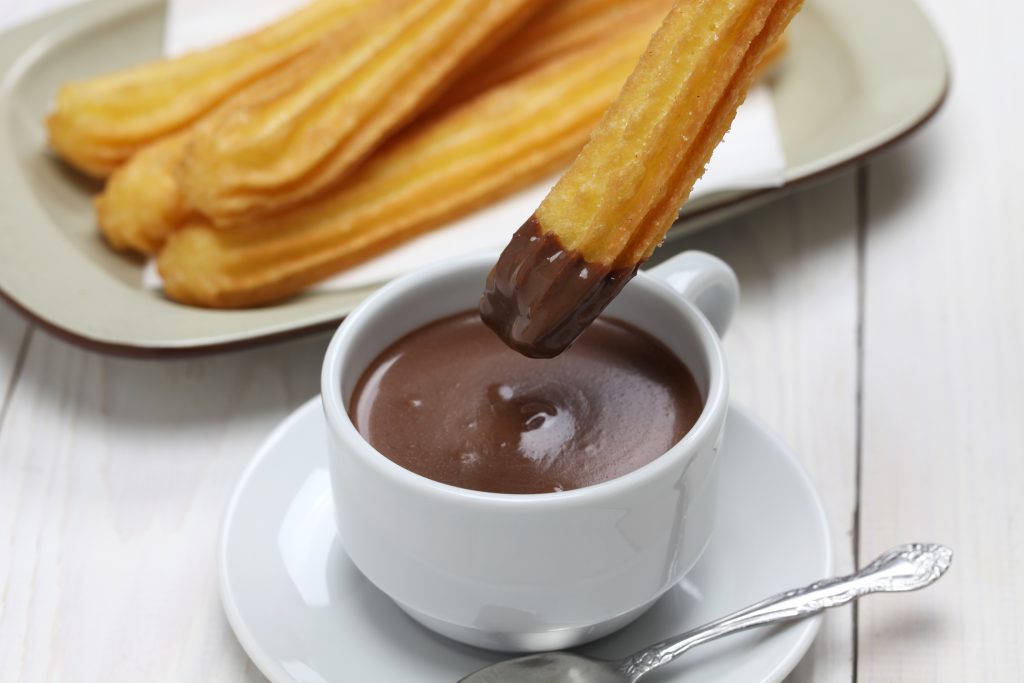 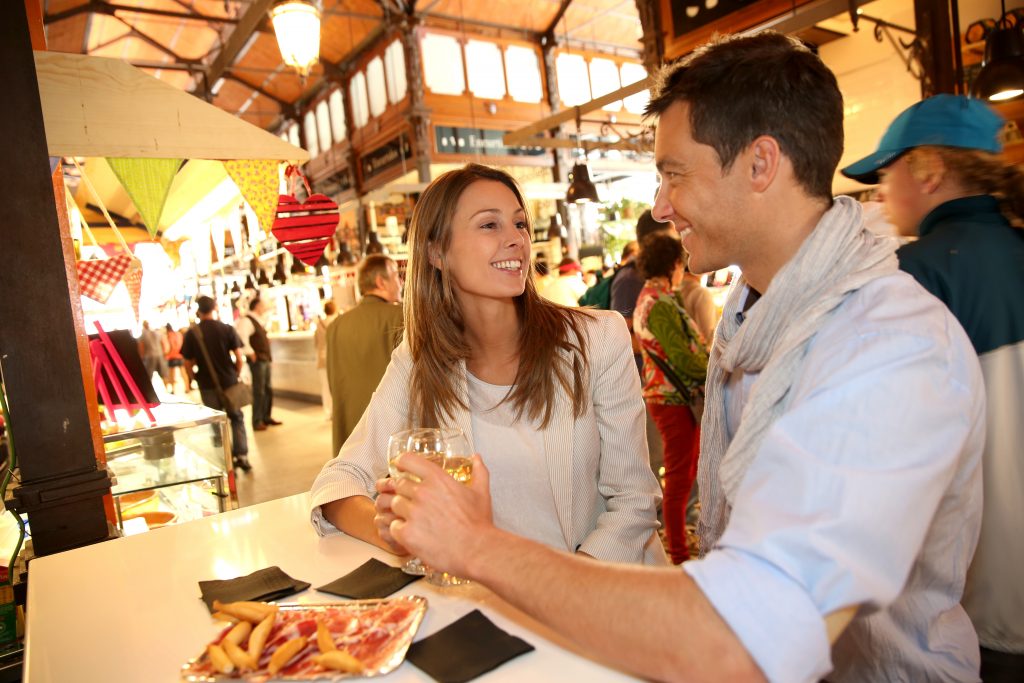 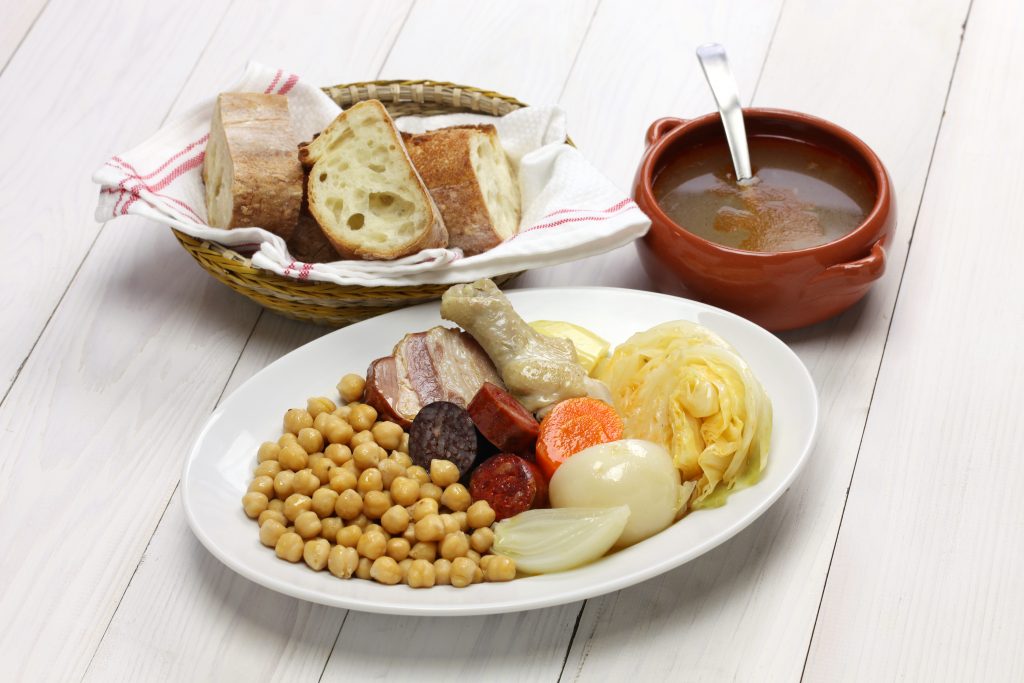 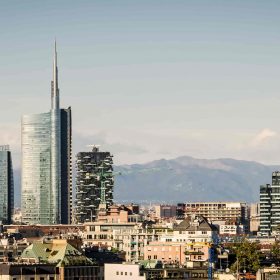 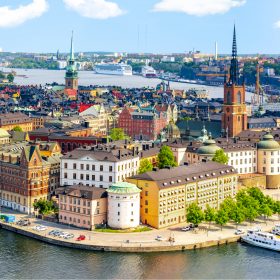