July 25
Find best flights
Only 1 child aged 0-2 per adult is allowed!
Share this

Learn more about flights to Riga.
Crazy Llama will help you quickly and easily choose and buy tickets to Riga​ 🛫

Located 13 km west of Riga downtown in the Mārupe Municipality, is the Riga International Airport (RIX). It is the largest airport in the Baltic states and serves as a hub for airBaltic, RAF-Avia and SmartLynx Airlines.  Transit to and from the airport is by bus, taxi or car rental.

The best time to explore the city
in July
Prices
Hotels from $13.48
Temperature
Riga is coldest in February when the average temperature is -5°C, and hottest in July when temperatures average 17°C. The most daily sunshine is in June at 12 hrs.
Precipitation
The average annual rainfall for Riga is 636 mm. August is the wettest month with up to 90 mm of rain.
The weather

The best time to visit Riga is in July when the weather is warm and the hotels are cheaper. 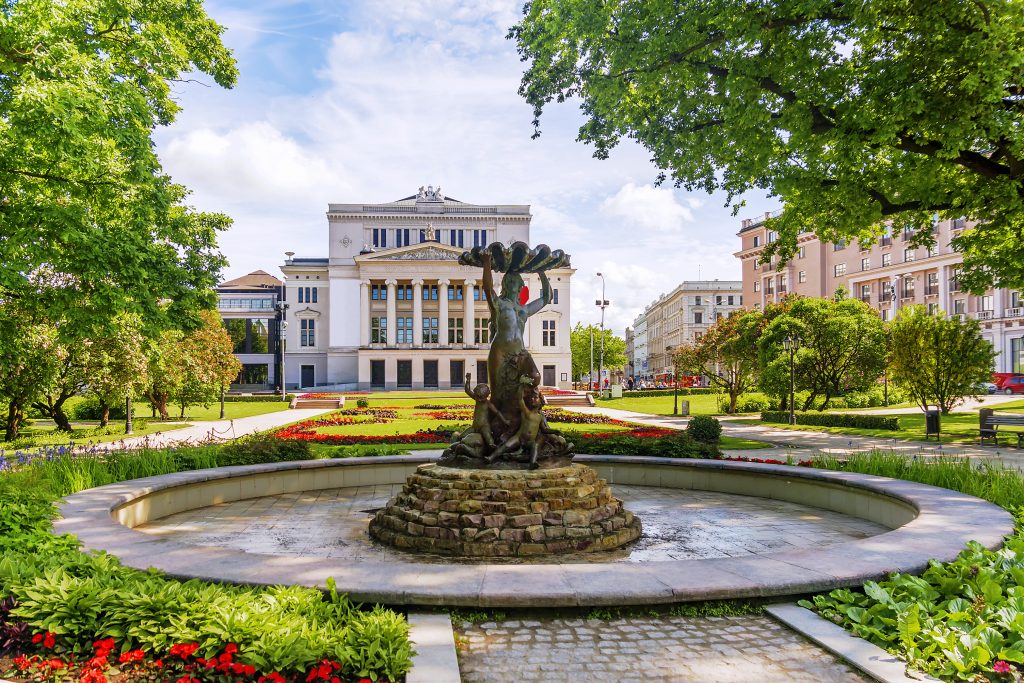 The largest city in the three Baltic states, Riga is the capital of Latvia and home to one third of the nation’s population

Situated at the mouth of the River Daugava, on the Gulf of Riga, it is one of the oldest cities on the Baltic Sea. Located in the geographical centre of the Baltic States, Riga has been an important centre of finance, culture and trade for centuries.

A cultural centre enriched by a multicultural community, it is one of the most exciting cities of the Baltic states and is home to a medieval Old Town, art nouveau architecture, as well as many museums and concert halls. 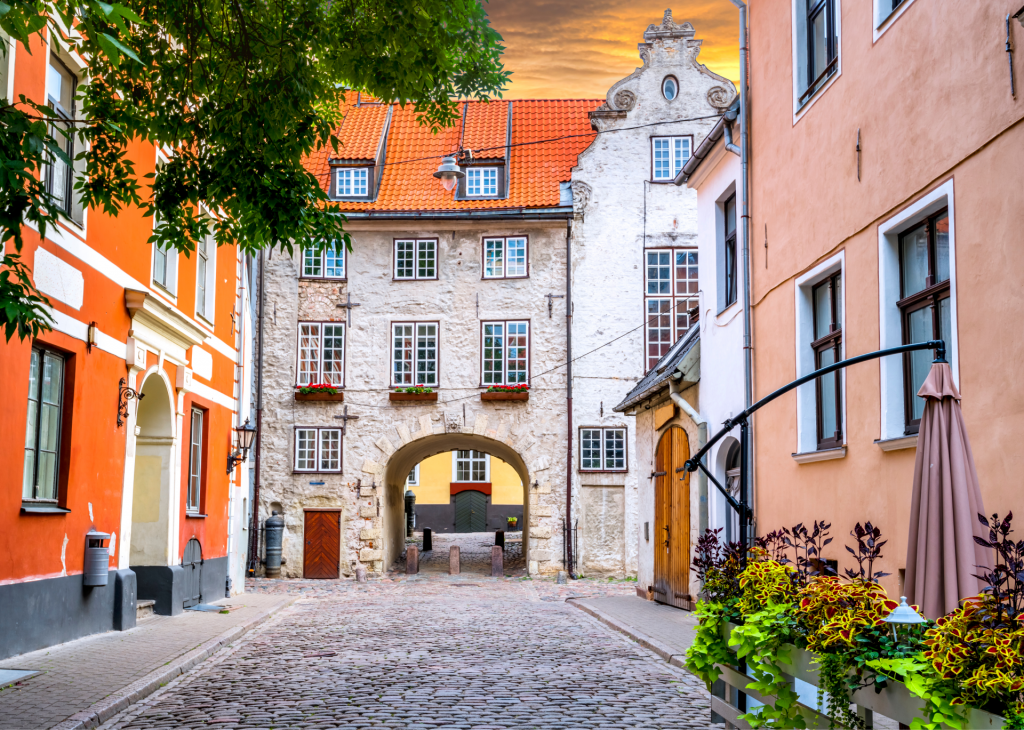 Things to do in Riga

A city of trendy nightlife and dining spots, most of Riga’s attractions are located in its UNESCO listed Old Town. A walk only area of architectural masterpieces and unique buildings, it offers a great opportunity to explore this historical part of the city on foot while enjoying its many cafes and restaurants.

Asides being home to over 800 Art Nouveau buildings, this Medieval Hanseatic League member city has much to explore by way of history, having lived under Polish, Swedish, Russian Empire, Soviet and Nazi rule. The city also has a great collection of markets, spas and wellness centres to enjoy after a day of sightseeing. 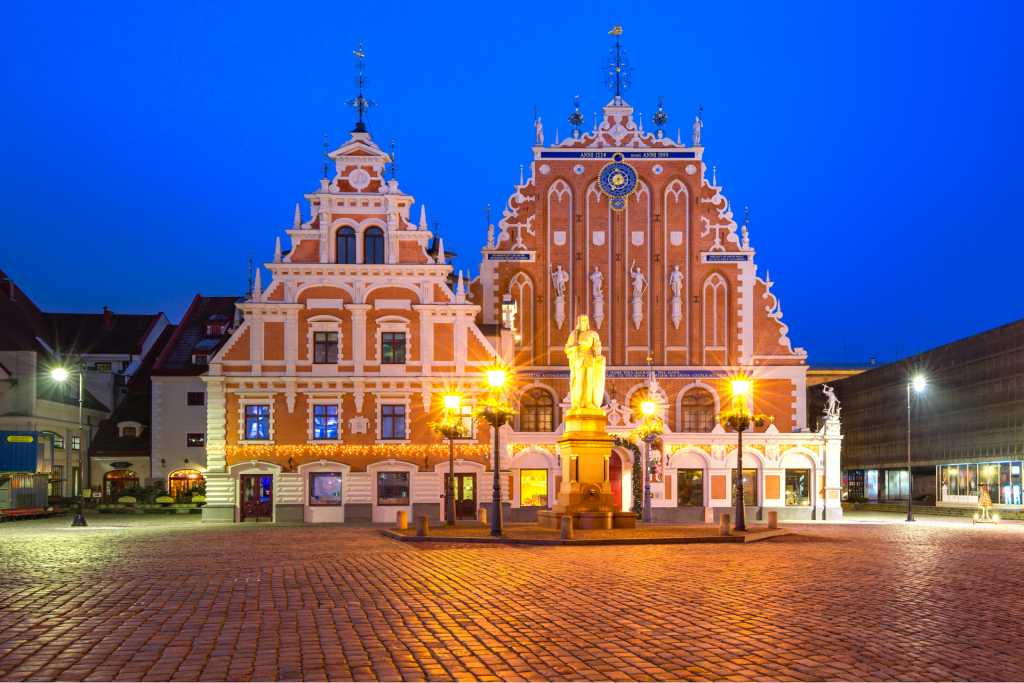 House of the Blackheads

Built originally for an association of unmarried merchants and ship-owners, the House of the Blackheads located on Town hall Square, was completed in the 1330s. A point for trade and business in the city during the Hanseatic years, the building was home to the Blackheads, bachelors who breathed life into society, with a host of parties and celebrations.

The building houses original vaults from the 14th century, located in its basement, a collection of antique silver, and a grand Celebration Hall. Destroyed in 1941 during a German bombing raid, the House of the Blackheads was reconstructed in 1999 after the Soviet period. 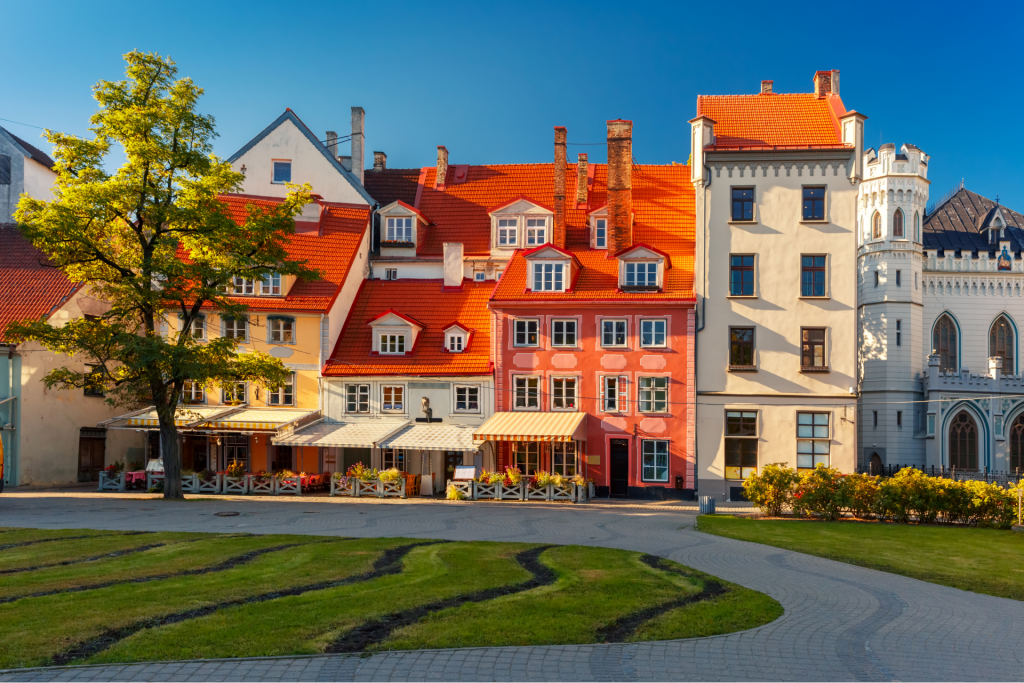 Located on the right bank of the Daugava River is Vecrīga, the Old Town of Riga, which is listed as a UNESCO World Heritage Site. Filled with art galleries, museums, sociable squares, restaurants and a vibrant nightlife, the cobblestone streets of Vecrīga are a great place to pass time. The city’s oldest houses and churches can be found here. Though Vecrīga lost a huge amount of its monuments to WWII, most were rebuilt after independence in 1990.

Many visitors enjoy walking along Skārņu Street, which has an arts and crafts market where many stop to buy souvenirs. You can also order the tasty choux pastry dessert, Vecrīga, named after the old town, from any one of its many cafes. 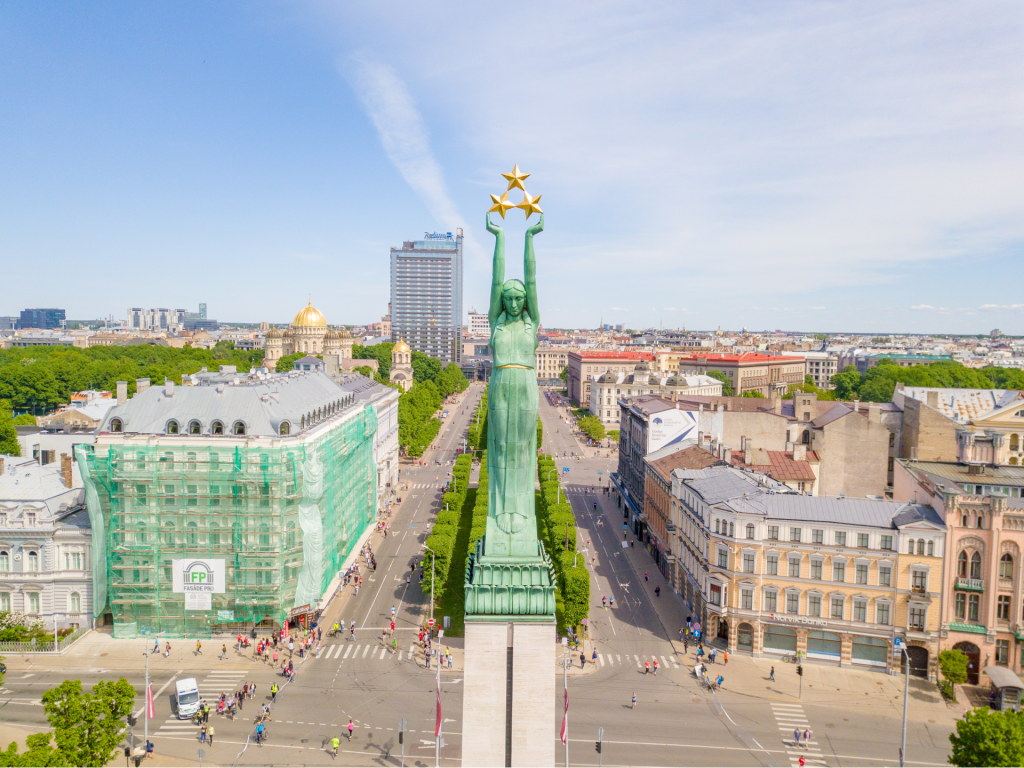 Standing at 42 metres high, east of Vecrīga, is this monument of a statue of Liberty, holding three golden stars. It commemorates all of the soldiers who died during the 1918 – 1920 Latvian War of Independence against Soviet forces.  A centerpiece for official remembrance ceremonies in Riga, the Freedom Monument has 13 series of reliefs at its base, which represent important turning point moments in Latvian culture and history, like the War of Independence and the Russian Revolution in 1905. 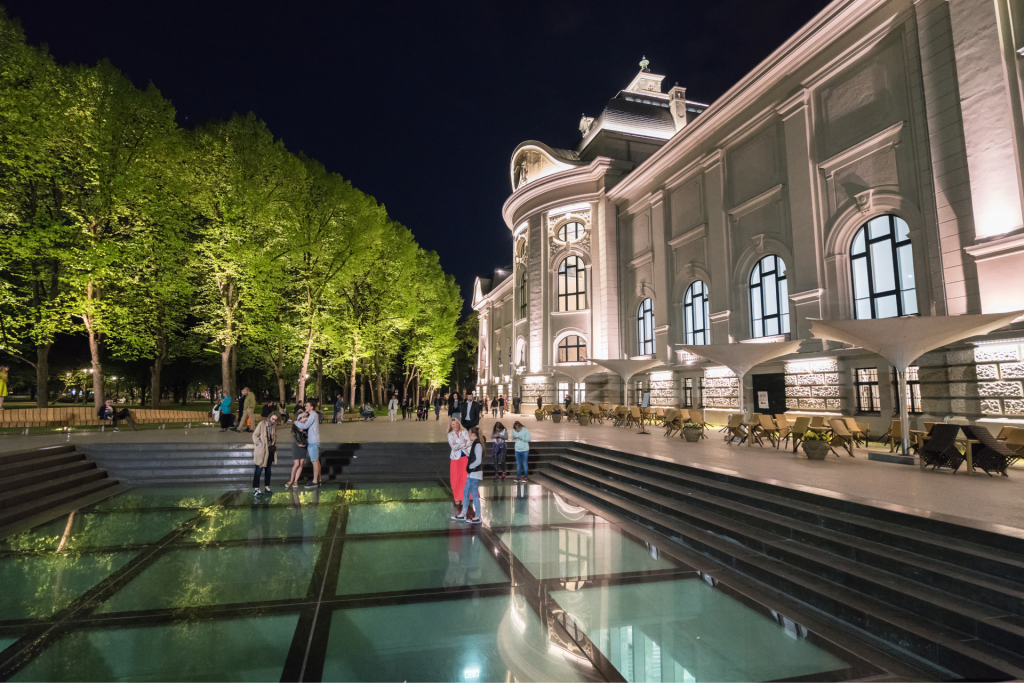 Built by Wilhelm Neumann, a Baltic German architect in 1905, the Latvian National Museum of Art is filled with 19th and 20th century Latvian art. At the time it was completed, it was the first purpose-built museum building in all of the Baltic States. Asides its two floors filled with art from creators such as Art Nouveau artist Janis Rozentāls and Johans Valters the Expressionist, the building has temporary exhibitions in the basement and a roof terrace from which you can get marvellous views of the city.

Influenced by other Baltic countries, Latvian cuisine usually features meat, fish and agricultural products in most dishes. A few you would come across include, karbonāde, a Latvian type of schnitzel, which is usually covered in mushroom sauce and served with cabbage and potatoes.

There is also the cold beet soup, called aukstā zupa, a savoury creation consisting of gherkins, beetroot and dill.  Another is pīrāgi, delicious moon shaped dumplings with fillings of chopped bacon and onions. 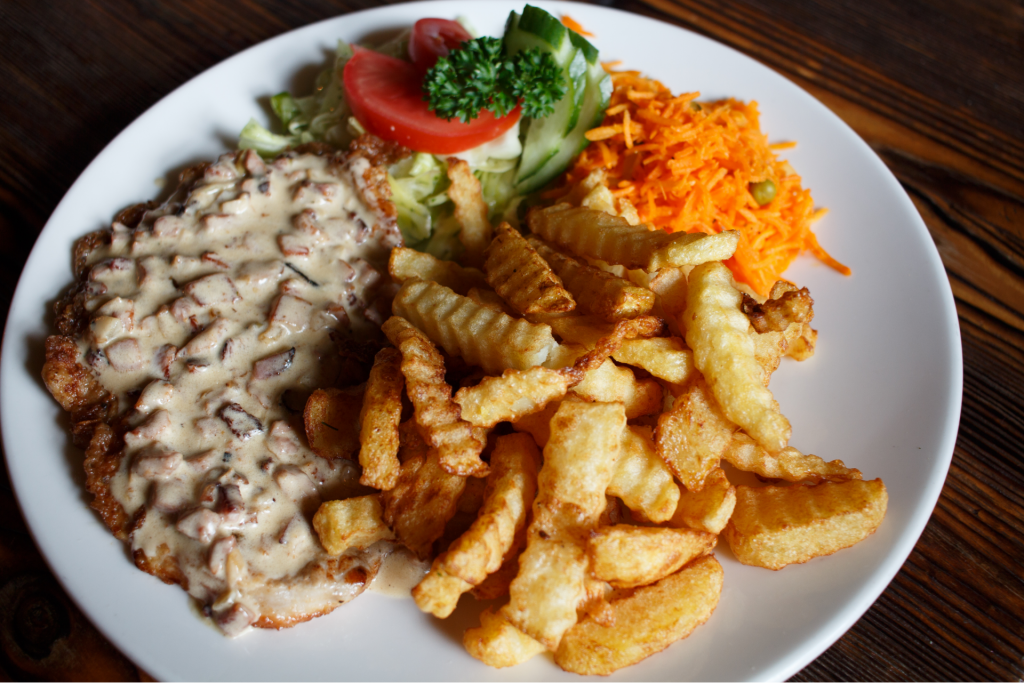 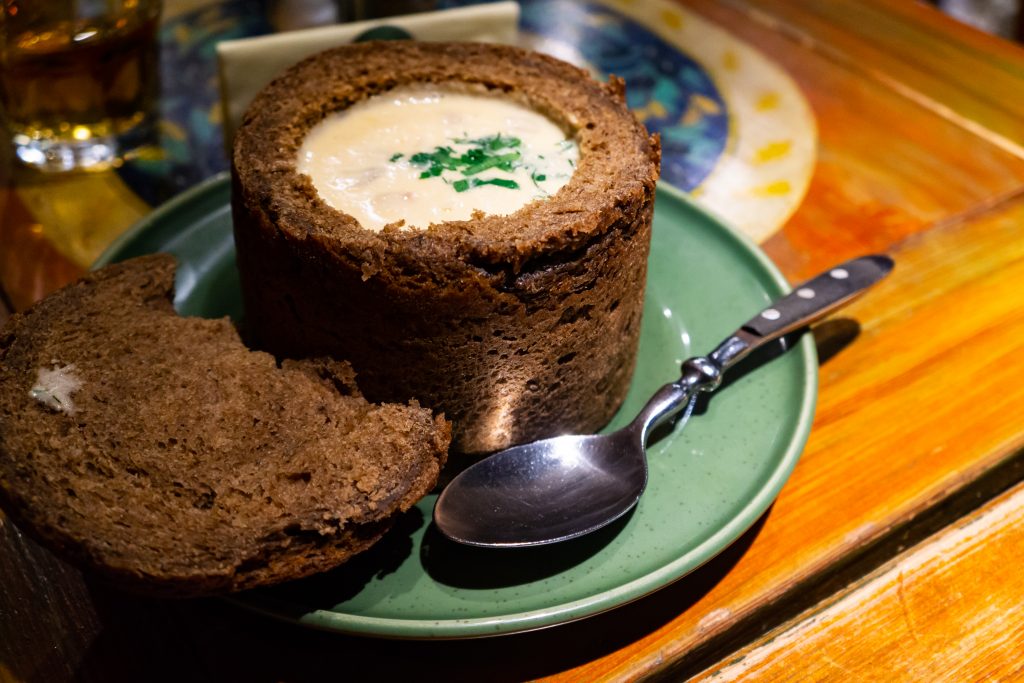 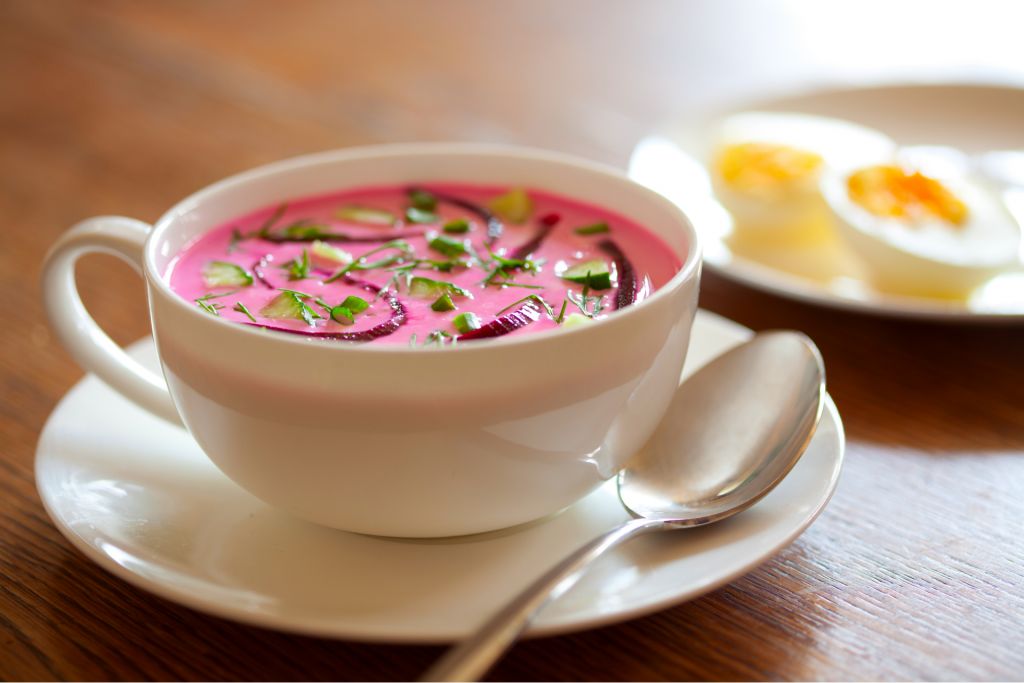 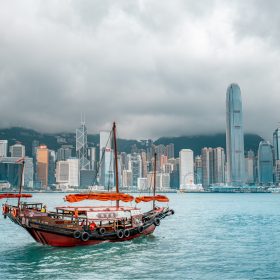