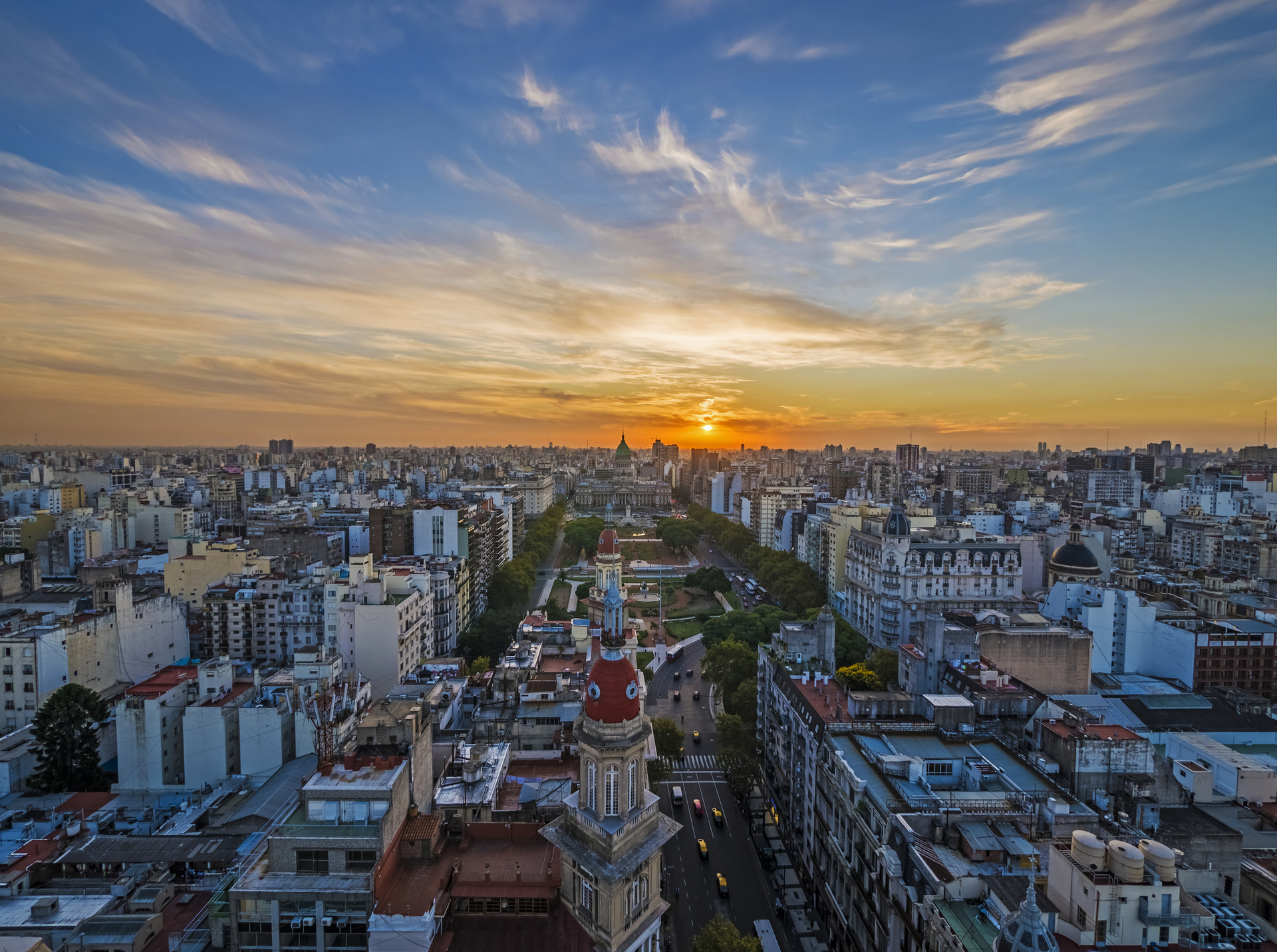 Crazy Llama will help you quickly and easily choose and buy tickets to Buenos Aires.

Buenos Aires is the capital of the Argentine Republic. Its name in Spanish means "good air" (although in the modern world this has long been wrong). Buenos Aires is one of the largest cities in Latin America, with which all trips around Argentina usually begin. But in this city it is worth staying at least for a few days to see its unique atmosphere.

Argentina's largest international airport is named after General Juan Pistarini. It opened in 1946 and has since become much larger, more modern and generally better.

The airport boasts relatively fast passenger services. Even at peak loads, the queues at the migration control move quite quickly. Just like downloading data through a well-designed wireless Internet network.

In addition, the airport is clean and there are a lot of shops, if you need to kill time before departure. In addition, tourists note a high level of security at the airport. But what may be missing here is free outlets and friendly staff. 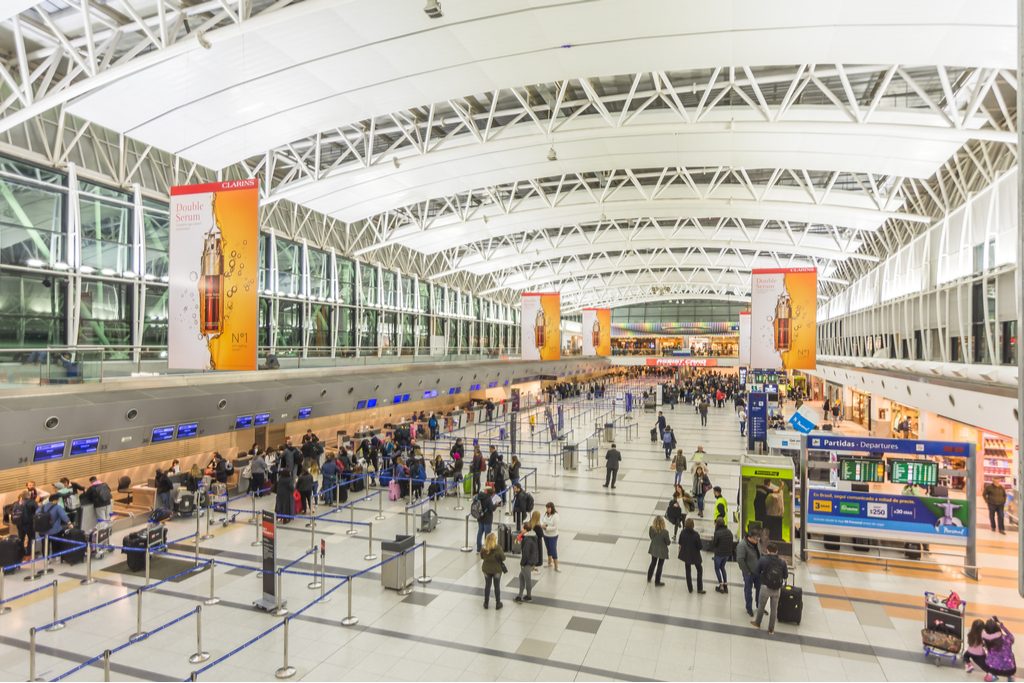 The airport is quite far from the center of Buenos Aires, you have to overcome 32 km on the way. Of course, you want to do this quickly and with maximum comfort. Yes, and cheaply. But all the factors together will not be offered by any transfer option in Buenos Aires.

Conveniently and quickly a taxi will take you to the center. About 45 minutes should be enough to take you directly to the hotel. You can catch a taxi right at the airport. But you should rely on a cost of at least 20-30 dollars.

The second way is the shuttle bass. There are three at Ezeiza Airport. They all cost about $ 8 (the price varies depending on the amount of baggage). Choose the one that brings you closest to your destination. 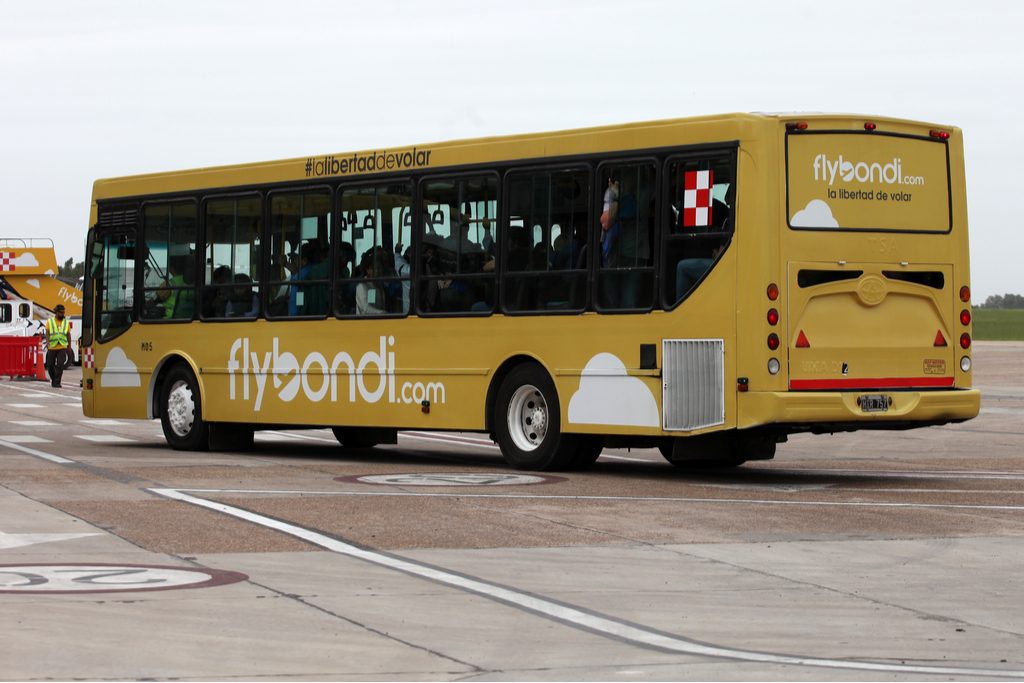 And the most uncomfortable and long way is the usual city bus number 8. Get ready for a trip of at least 1.5 hours and the possible abundance of people in the cabin. But a ticket for such a bus costs only $ 1. 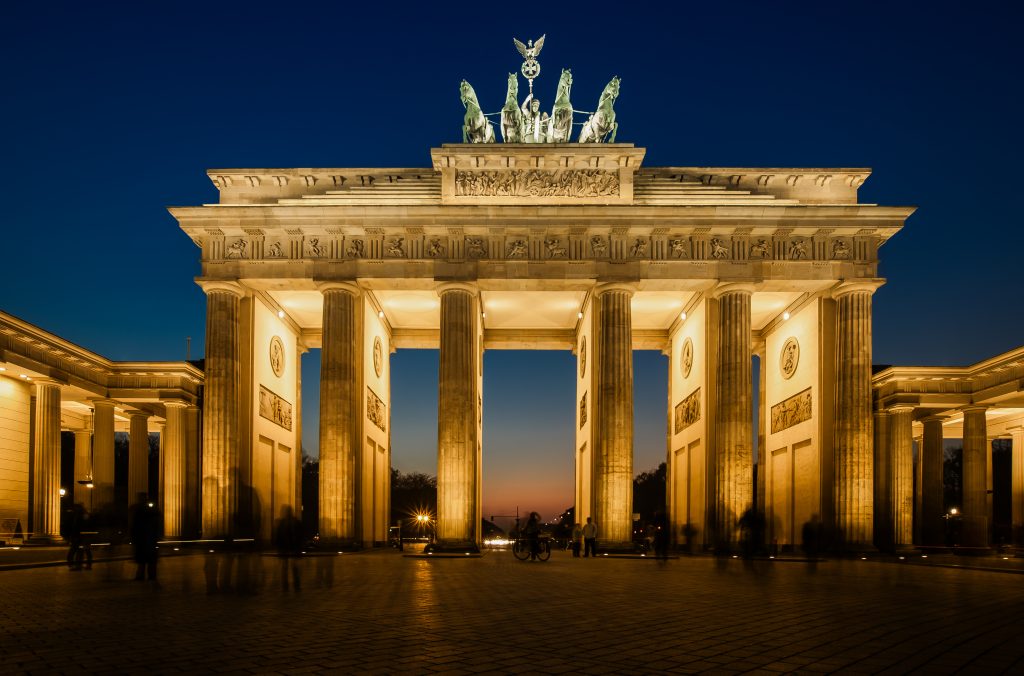 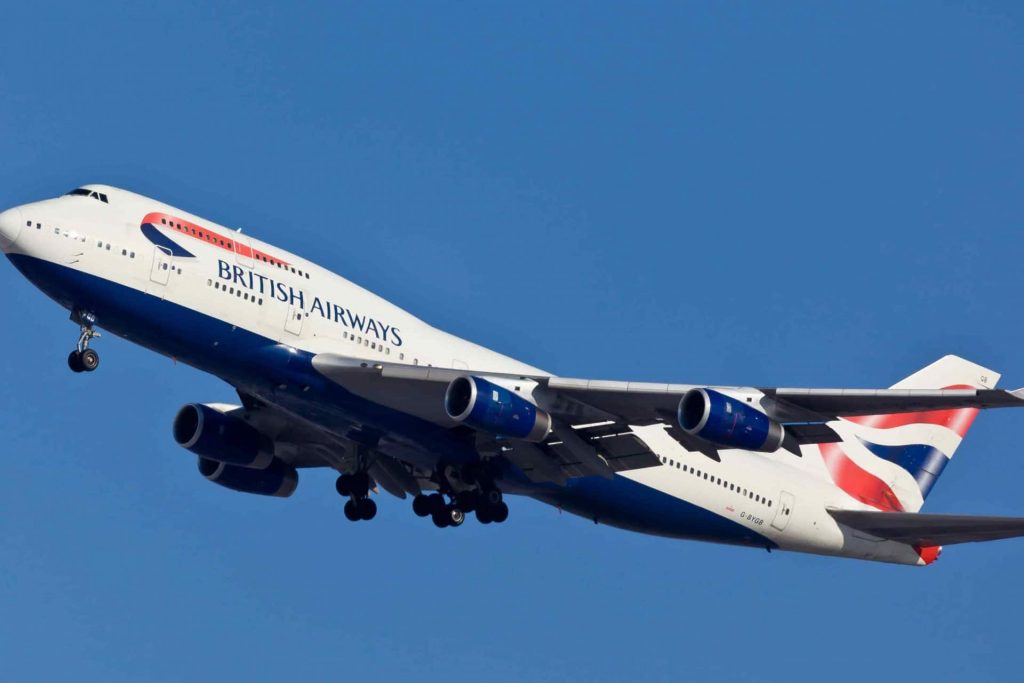 Best season to travel: March to May and September to November
Prices
Hotel from $7
Temperature
The average temperature during the year ranges from 7°C to 30°C
Precipitation
The average rainfall per year is 1256 mm
Weather

Piercing winds blow here in winter, and in summer it is impossible to breathe because of the heat. Therefore, tourists are advised to come to Buenos Aires in spring or autumn.

In the city itself and its environs, 18 million people live. This is a huge mechanism in which the main life force of Argentina is concentrated. Tourists and expats from all over the world come here. Therefore, Buenos Aires is always full of cultural events, hundreds of nightclubs, restaurants and cafes work. 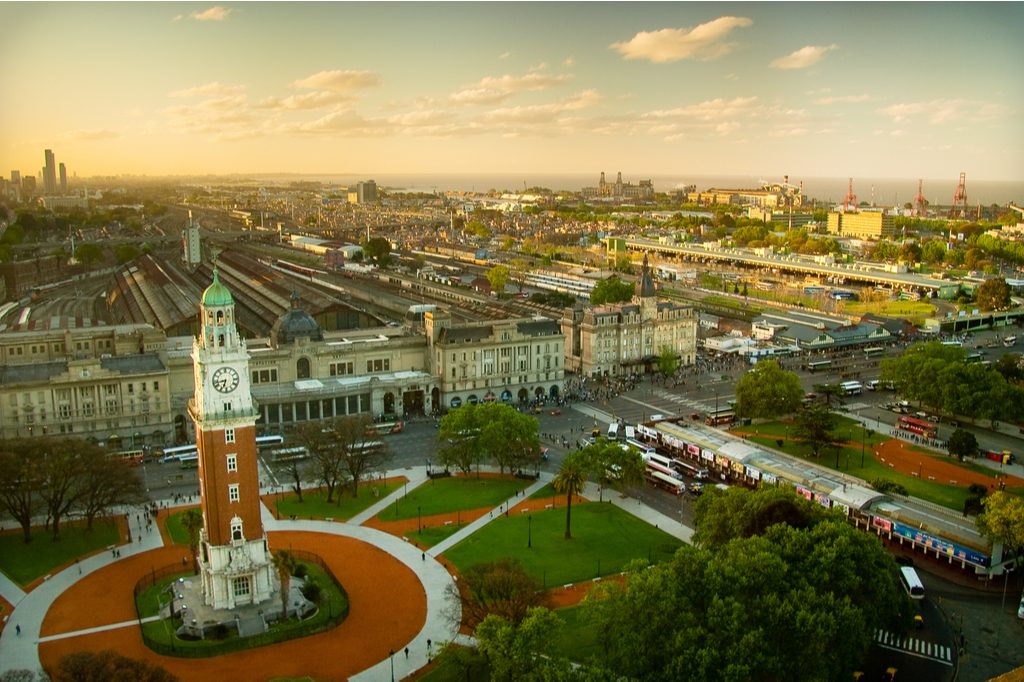 In one of the most colorful areas of the city of La Boca is the famous El Caminito street. There is so much life and color, as if you are in that very Argentina from stories about the region, where it is always warm, fun and dancing. Each of the street houses is painted in the brightest colors. And each wall is an ideal place for a selfie. At the same time you can look at local shops. They mainly sell football souvenirs, as the area itself remains the home of the local Boca Juniors football team. 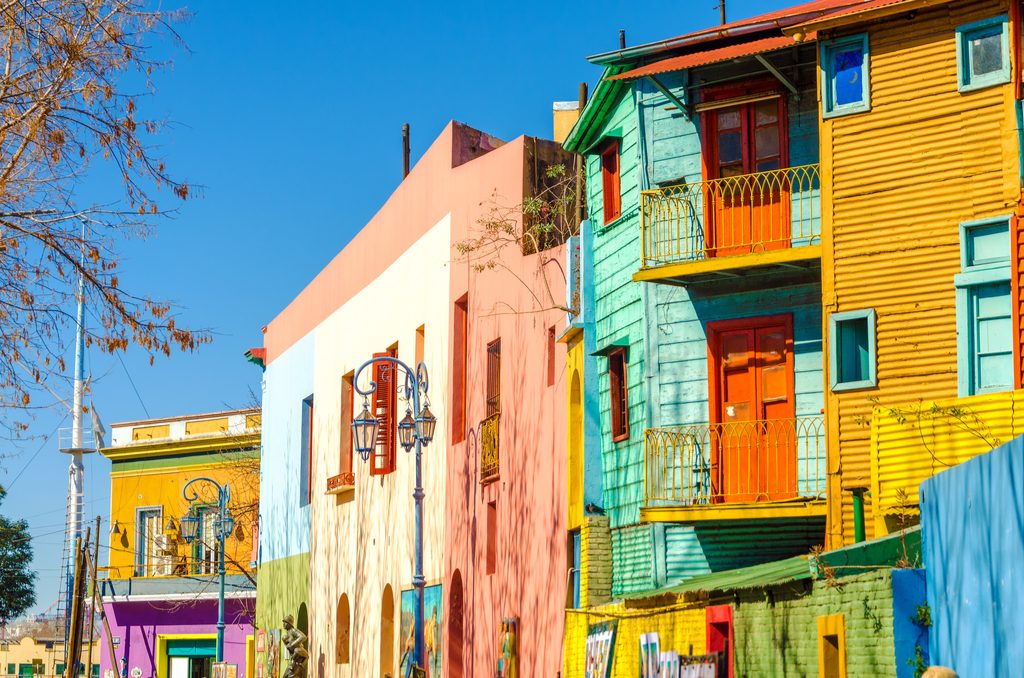 The main museum of contemporary art in Argentina has collected a huge collection of the most important achievements in the fine arts of the country. Here are the works of such famous Latin American artists as Frida Kahlo and Diego Rivera. There are less well-known names, but no less striking in their talent. This is a magical place where you can learn more about the complex history of Argentina than in any of the historical museums. 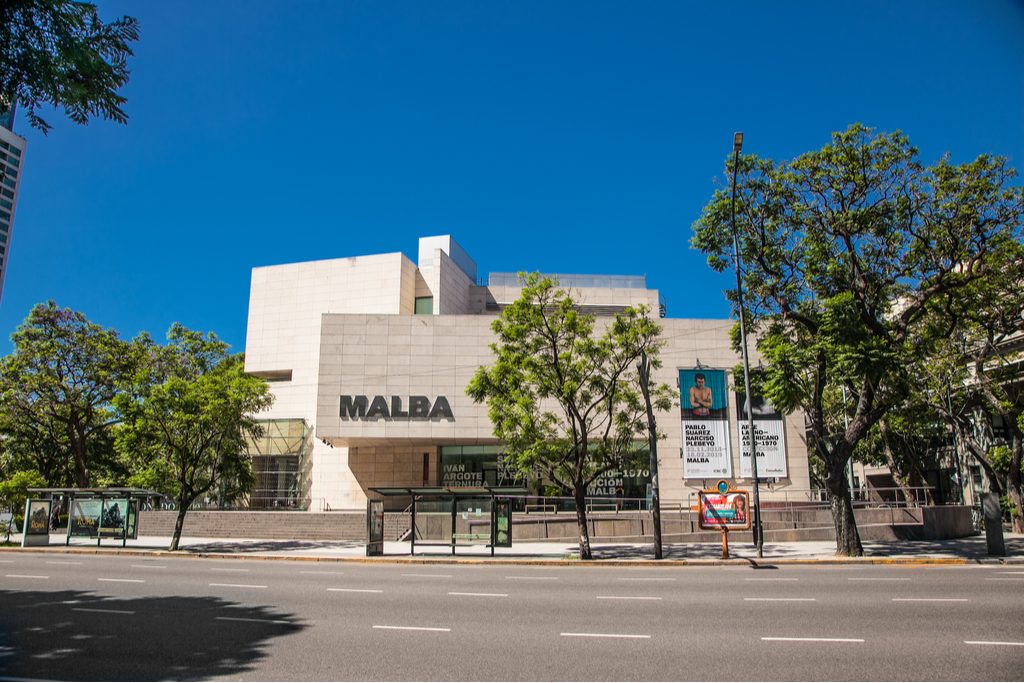 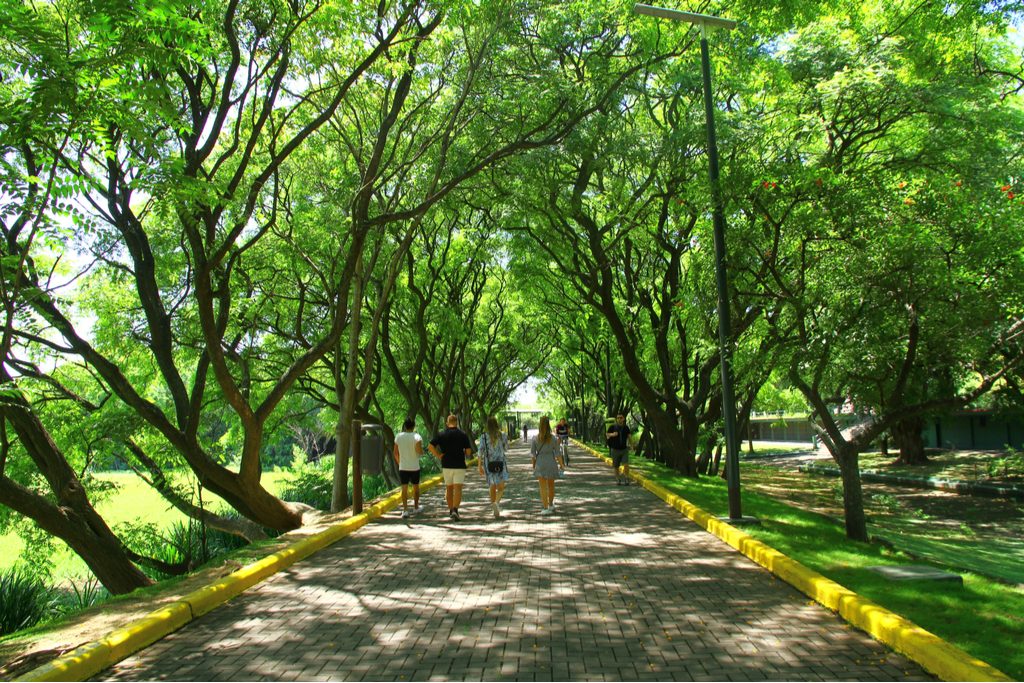 Right in the center of the city you can stumble upon the huge nature reserve Reserva Ecólogica Costanera Sur. There are special routes for walking or cycling. The park has four lakes, more than 200 species of birds and other wild animals. The most amazing thing is the opportunity to instantly get from a noisy city to a quiet conservation area. Take a walk, breathe fresh air, spy on the life of animals, and then return to the bustle of Buenos Aires. 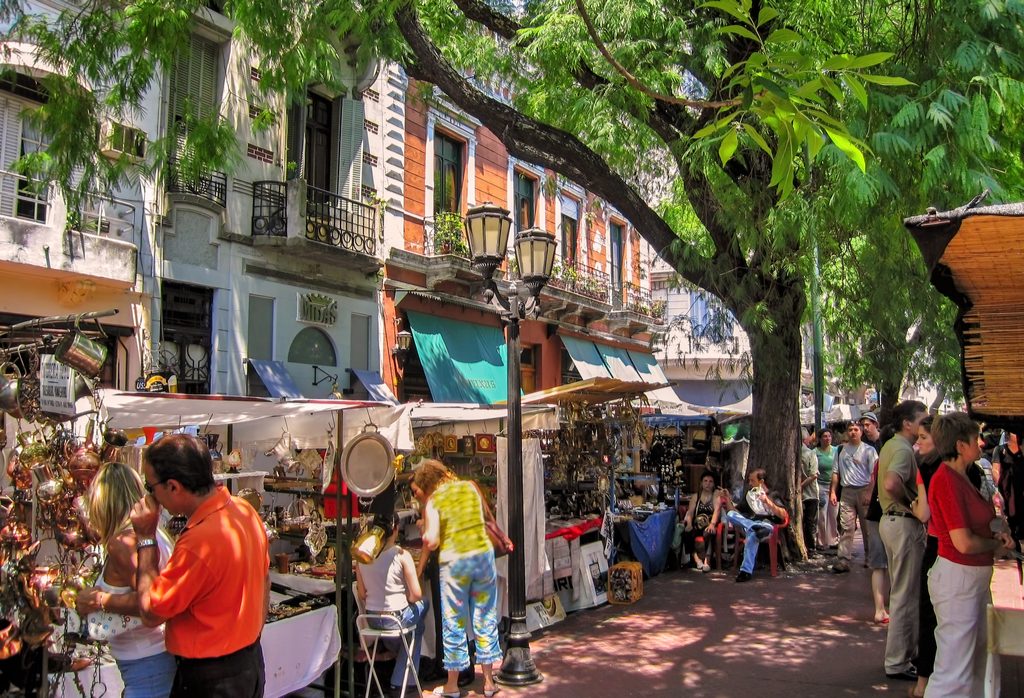 The weekend at San Telmo opens up a spontaneous market. Literally everything is sold here: from clothing to antique household items, from souvenirs to handicrafts. You can walk around the market for hours, looking for unusual souvenirs. But not only the market. The San Telmo area itself is of particular interest to the tourist. This is the oldest district in Buenos Aires with cobbled streets, beautiful houses and old churches. 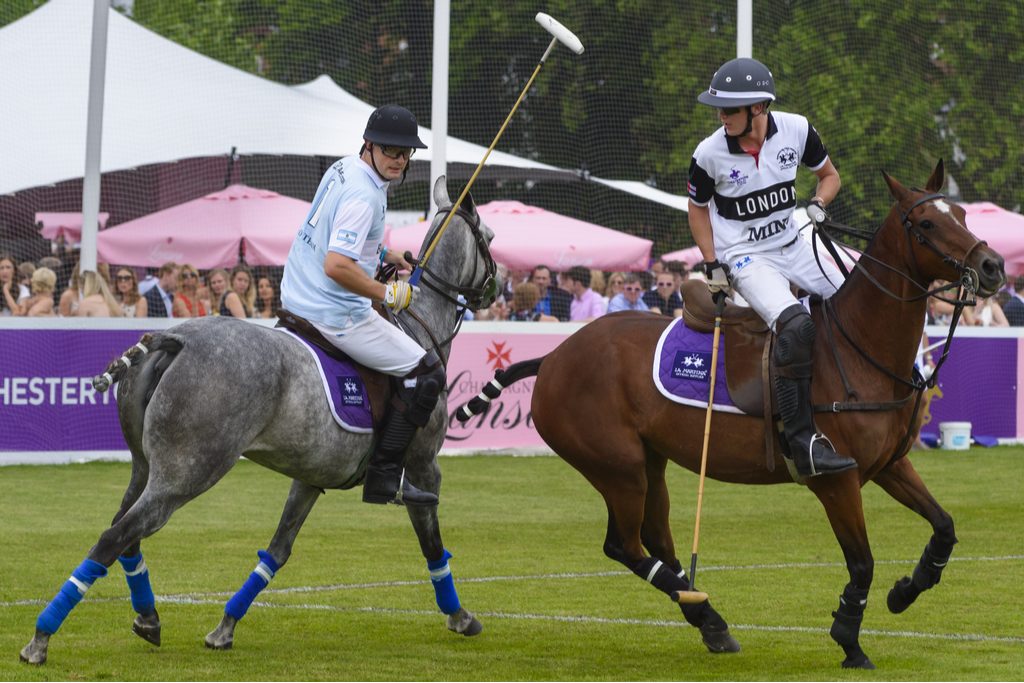 If you thought that all of Latin America is about football, then in reality this is not entirely true. For example, Argentina is known for its great love of polo, oddly enough. The main game season runs from September to November. And you are especially lucky to get to one of the matches in November, when the Open Tournament is taking place in the chic area of Palermo. Everyone comes to watch games: from office workers to local celebrities. And you can get new impressions of an unusual game 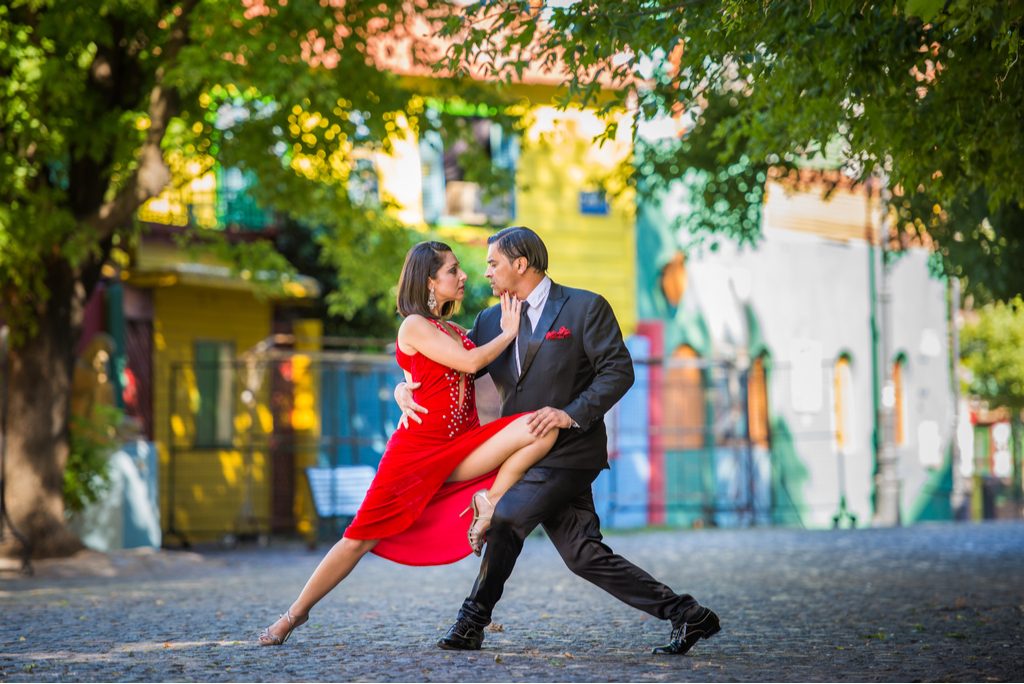 Rumor has it that tourists who have not even looked at the local tango dancers, the migration control does not let out of the country. (A joke, of course, but seriously: not joining tango in Argentina is almost a crime.) This dance is actually inscribed in the cultural code of the Argentines. And you can truly understand them only through a tango lesson in one of the many local schools. Many classes are held in bars, where professional dancers teach several movements.

What to eat in Buenos Aires

As in most capitals, the culinary culture of Buenos Aires has developed under the influence of immigrants. Residents from all regions of South and Central America have come here with their favorite recipes and traditions. In Buenos Aires, you can find everything from upscale Peruvian restaurants to small Colombian counters where the best ceviche are served, not to mention these famous empanades.

By the way, empanades are sold here at every step. These are baked pies in the form of large dumplings that start with everything that only comes to mind (as well as dumplings).

If we talk about food, which the residents of Buenos Aires most consider their own, then these are Milanesa sandwiches. They are made from a ciabatta-like bun. Cut in half and put inside the fried chicken, generously pouring it with tomato sauce and sprinkling cheese on top.

What all the locals are crazy about is pasta and pizza. Oddly enough, Italian food feels good in Buenos Aires. Especially locals love pasta, which is served in almost any institution in the city. It is unlikely that more types of pasta are made here than in Italy, but the Argentines have achieved a certain skill. 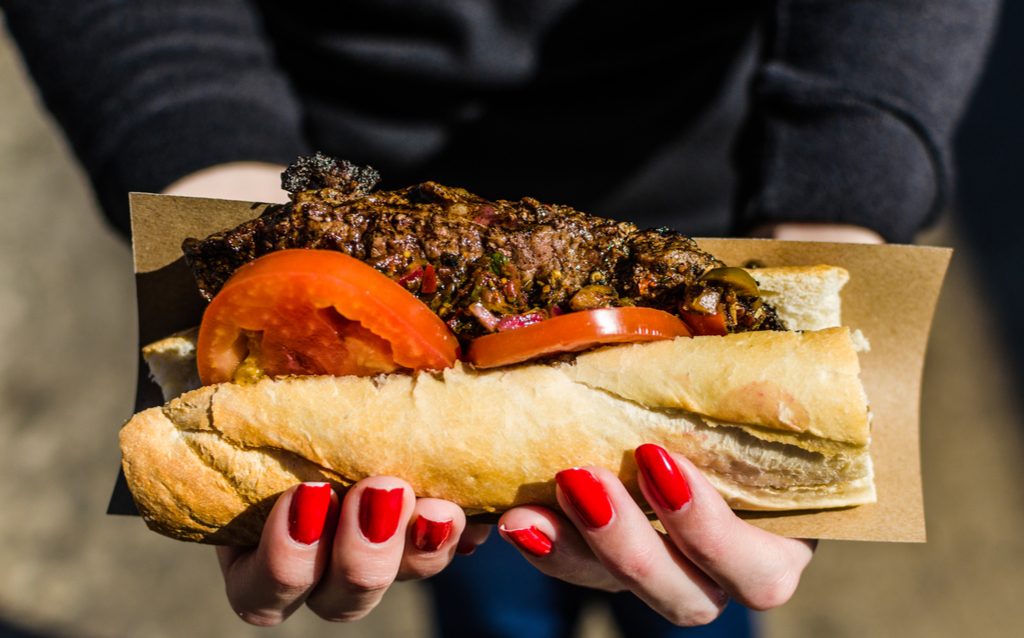 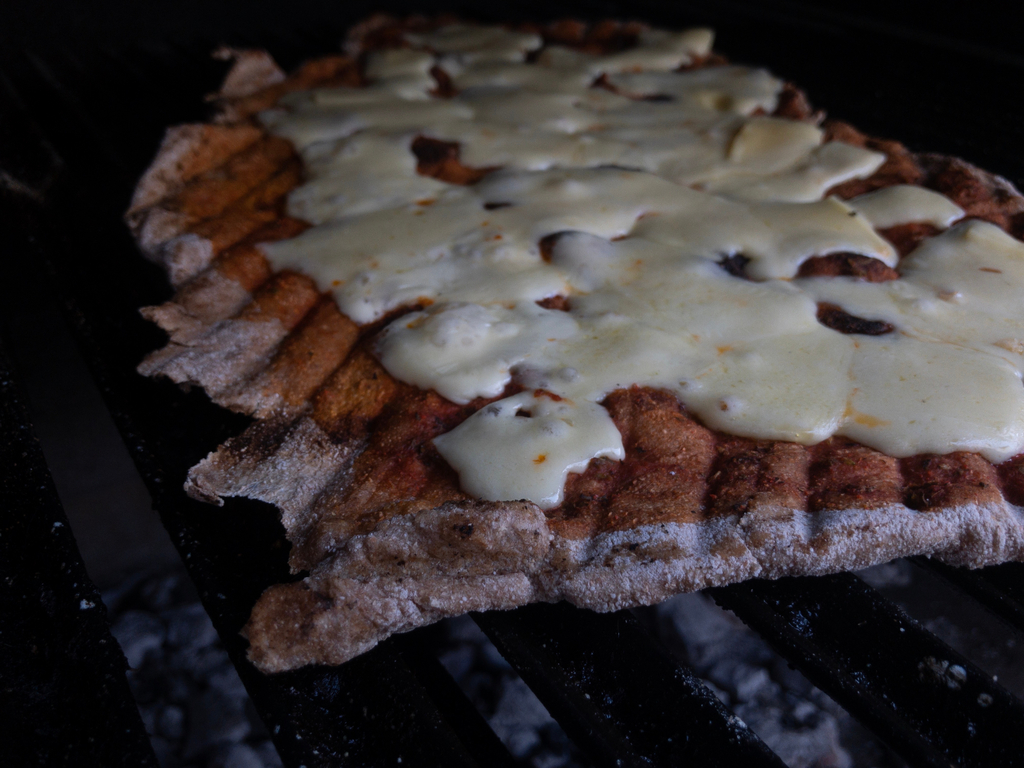 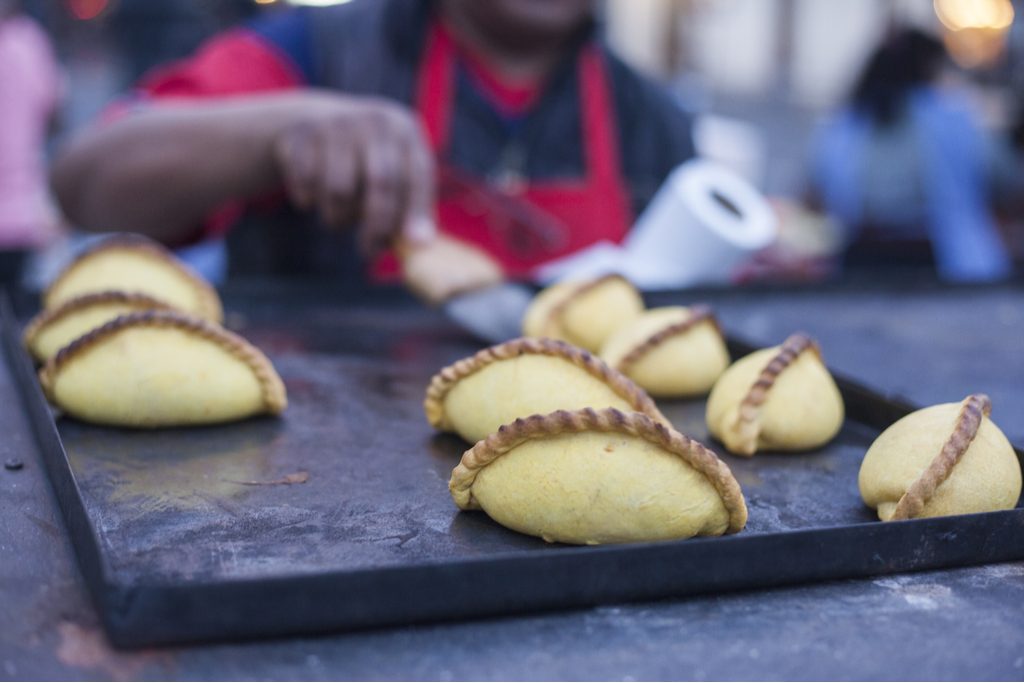 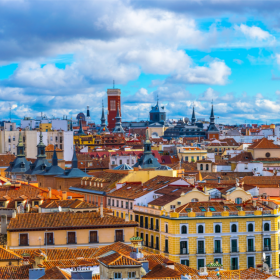 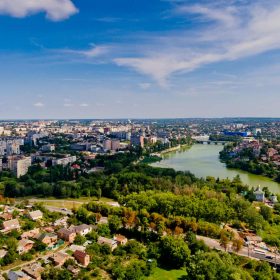 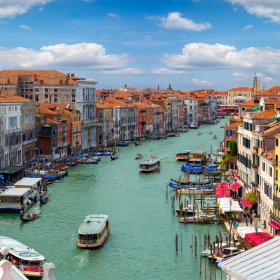